Have a look at the packages for destination wedding, honeymoon and vow renewal provided by MyWeddingAway.com.

Destination wedding Mexico has warm gentle breezes floating inland from the ocean. It has thick jungles scattered with ancient ruins and wildlife. It has a mixture of colonial and industrialized cities. Each of its regions greets travelers with enchanting and magical surprises from street festivals to eclectic restaurants to modern shopping centers and rustic markets. Authentic and charming, Mexico’s diversity is something to be experienced. 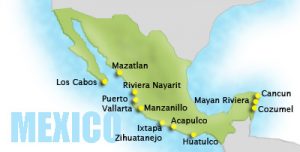 Shopping. A paradise for travellers who are fond of the bartering system, Mexico offers plenty of markets with both colorful souvenirs and locals. For those who prefer to know the price upfront there is no shortage of boutiques in the larger cities. Best finds are silver, Mexican blankets and pottery.

Ruins. Scattered up and down both coastlines, the temples and ruins of Mexico often date back to over 2000 years old. The rich history of Mexico is compelling, fascinating and at times unbelievable.

Tequila. Taking its name from the city of Tequila in the Jalisco region, this National drink is made from the hearts of blue agave plants. Not from cactus as commonly believed.

The Food. Mexico offers everything from traditional cuisine with intense flavors and colorful decoration to International restaurants ranging from Thai to Italian. No matter what you are craving, you will find it in this culinary haven.

Mexico wedding packages are among some of the best

Official Language – Latin American Spanish and Nahuatl in some areas

Chiles en nogada. The name of this dish comes from the Spanish word for walnuts, nogal. It consists of poblano chiles filled with picadillo (chopped meat, fruits and spices) and topped with a walnut-based cream sauce and pomegranate seeds giving it the three colors of the Mexican flag (red, green and white)

Tlayudas. A popular snack food. These are large tortillas covered with refried beans, cabbage, shredded meat, cheese and salsa.
Mole sauce. A rich sauce made from chocolate, chilies and many spices. It is typically served with chicken or turkey and depending on the ingredients it can be either red or green in colour.