Whether you seek soft beaches, powerful surf, refined sophistication or the up-tempo, festive feel, Barbados has something for everyone. It is the easternmost of the Lesser Antilles islands and, as such, enjoys the graces of two oceans – the Caribbean Sea on its west side and the Atlantic Ocean at its eastern end. The two bodies of water converge on the island’s southern shores, where smaller hotels – and legions of windsurfers – await. 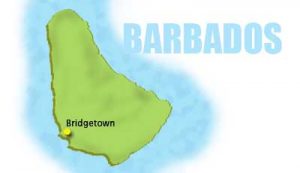 The local Bajans, as they are known, display a brawn inherited from both 3 1 ⁄2 centuries of British rule and the faith and endurance of the former slaves who populated the island to cultivate sugarcane. A wealth of traditions have influenced every facet of life, from music and dance to cuisine and herbal “bush” medicine.

The island offers much to see and do: Broad Street in Bridgetown, the island’s capital city, is home to several large department stores and duty-free shops offering prices that can be 20 to 40 percent lower those than back home. Sunbury Plantation House, which dates from 1660, houses a collection of antiques, including carriages and farm implements. Other homes worth touring include St. Nicholas Abbey and the Francia Plantation. Take a tram ride through Harrison’s Cave to view stalactites, stalagmites, waterfalls and pools. Stroll through Andromeda Gardens, or tee off at one of three golf courses, including the Green Monkey, at the rebuilt Sandy Lane resort. The Garrison Savannah horse races are a hot ticket and other popular sports include cricket (the national sport), tennis, squash and polo.